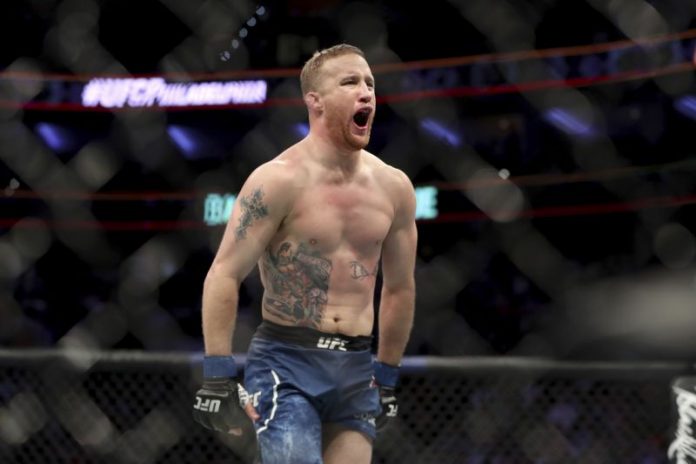 Justin Gaethje was an NCAA Division I All-America wrestler at Northern Colorado in 2010, though you wouldn’t know it by watching him fight in MMA.

In six UFC bouts, he’s attempted exactly one takedown. He’s not coming to grapple or slow the pace or do anything other than blitz out of the corner and throw as many strikes as he can.

Gaethje stands on the precipice of the biggest fight of his life, when he meets No. 1-ranked Tony Ferguson in the main event of UFC 249 on Saturday at VyStar Veterans Memorial Arena in Jacksonville, Florida, for the interim lightweight belt.

The UFC will be the only live sport going on Saturday in the U.S., and all eyes will be on Gaethje and Ferguson. Those who have never seen either man fight before are about to have their minds blown.

This will be a symphony of violence potentially unlike anything the UFC has ever seen before.

“This is an insane main event,” UFC president Dana White said. “Tony hasn’t lost in like eight years. Gaethje has had six fights in the UFC and won seven bonuses. This fight is incredible. It’s a very violent main event. Anything can happen in this fight. Either guy can win. But guys have the tools to stop this fight at any time. It’s a very fun fight.”

Gaethje took the fight on less than three weeks’ notice originally, when it was supposed to be on April 18. Champion Khabib Nurmagomedov had gotten stuck in his native Russia and couldn’t get back because of travel restrictions due to the coronavirus pandemic, so the UFC offered Gaethje the fight.

Gaethje, who is as blunt and honest as he is fierce and aggressive in the cage, admitted in interviews that he knew he couldn’t be 100 percent in that short period of time. That’s a terrifying thought against an opponent like Ferguson, who has won 15 of 16 in the UFC and leaves opponents looking like they’d washed their face with barbed wire.

But when the UFC postponed the April 18 show at ESPN’s request, Gaethje got three additional weeks to prepare.

He said he was never afraid of what might happen. He just knew that being at less than his best cardio-wise could be a disaster against a fighter like Ferguson.

“Fear had nothing to do with what was going on,” Gaethje said of his comments in early April. “It was the opponent I was facing. I know that man is a cardio machine and it is just impossible to get ready in 18 days. I had been very surprised and it is crazy how my body has responded with the extra time. You are only scared if you are worried about winning or losing. That is not a factor here. I care about effort and the fact that people know I never quit. I never quit. If people see you quit then you can’t inspire people.

“I am there to go as hard as I [expletive] can for as long as I can. And I got the perfect opponent right there, man. He is a cardio machine. So the fear came from knowing that with 18 days it was going to be absolutely impossible to be ready for 25 minutes. With the five weeks I have had now, I am 100 percent confident. And yes, man, I am ready.”

And then the guy who has spoken of becoming a social worker because of his desire to assist people made the kind of comment that only an MMA fighter would make.

Ferguson is noted for his sharp elbows, which have repeatedly opened cuts and even broken opponents’ bones. That made Gaethje light up as he thought of it.

“I need my nose broken, so hopefully one of those elbows [connects],” he said. “I haven’t been able to breathe through my nose for 12 years since wrestling. So hopefully one of them elbows cracks me in my nose. The UFC is going to pay for that [surgery]. And it is an exciting-ass fight.”

As Ferguson listened on a conference call, he got excited listening to Gaethje speak and shouted, “[Expletive], yes,” as he finished.