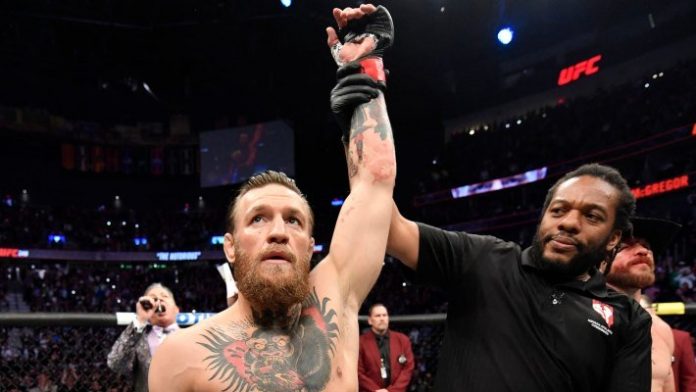 McGregor is no stranger to trading barbs with boxers. Back in Aug. 2017, he took on Floyd Mayweather in a “money fight” inside the boxing ring. McGregor lost the bout via 10th-round TKO. The boxing match ended up nabbing the second highest pay-per-view buys for combat sports in history. The event fell behind Mayweather vs. Manny Pacquiao.

During an appearance on The State of Combat podcast, De La Hoya expressed his belief that he’d finish McGregor early in a boxing match (h/t TMZ Sports).

It didn’t take long for McGregor to catch wind of De La Hoya’s comment and he responded on Twitter.

Dec. 2008 was the last time De La Hoya competed in a boxing ring. He was stopped by Pacquiao in the eighth round and decided to retire. He is still very much involved in boxing with Golden Boy Promotions.

As for McGregor, he made a successful return to the Octagon back in January. The “Notorious” one stopped Donald “Cowboy” Cerrone in the first round via TKO. It only took McGregor 40 seconds to pick up the win.