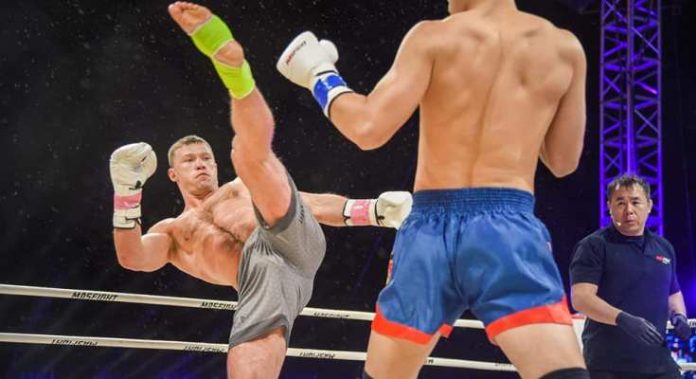 We caught up with Ukrainian kickboxing legend Artur Kyshenko to get the latest on his career.

Read on to get the latest news on Artur’s boxing career, his proudest accomplishment in kickboxing, his new online training program, and more!

Translation from English to Russian and Russian to English by Kirill Novikov (IG: kickboxingtv).

Q: How have you been keeping in shape with the lockdown? I read an article about the lockdown in Spain, and it said people were not allowed to go running until just this weekend.

Kyshenko: Good afternoon. It’s true that for 2 months we couldn’t go out on the streets and do some physical exercises there, or even run. I try to keep fit at home. How am I doing it? On my Instagram, Facebook and Youtube channel, I regularly share these techniques and exercises, so anyone who is interested – come in, see.

Q: You did an online chat with Gago Drago last month on your Instagram (IG: kyshenkoartur), and mentioned you spoke to GLORY Kickboxing about a fight with Glory champion Cedric Doumbe. Are you still talking with them about the fight?

Kyshenko: No negotiations are underway now. The idea and desire to conduct this battle is mine and Cedric’s. We are both sure that this would be an interesting fight. But today, due to lockdown, negotiations are suspended and there is no more information in this direction so far .

Q: You won your first match as a pro boxer in December but your second fight was postponed because of the coronavirus. I read that Spain is coming out of the lockdown in June, any news on your next boxing fight?

Kyshenko: Yes, I had a fight, scheduled for May 4th, but due to quarantine everything was canceled, and it is not yet known when my next battle will be. Although I certainly plan to continue boxing and continue my career both in boxing and kickboxing, now I can’t say anything specific about it.

Q: It’s hard to believe you’re only 33 years old. I remember seeing you fight for the first time in the K-1 Max GP in 2007. You’ve had over 200 fights, and been an IFMA World Champion, a KOK and Kunlun Fight Champion, and K-1 Max runner up.

You’ve accomplished a lot. Is there a particular fight or title you’re most proud of?

Q: You became a star in kickboxing because of so many exciting fights in tournaments.

A lot of promotions have stopped making eight-man tournaments. Do you think that’s one reason why kickboxing is not as popular as it used to be worldwide?

Kyshenko: I agree with this unequivocally. Organizations stopped holding tournaments-eights or fours and the show became less spectacular. Some organizations hold such tournaments, but at the same time they are making rather weak fight cards where there is a clear favorite. Such tournaments are completely uninteresting to watch.

Q: Starting this week, the Kyshenko Gym is offering online training in English, Spanish, and Russian for those interested in training with you. Can you tell us a little about the program?

Kyshenko: Yes, Kyshenko Gym, through me, began to provide online training, and not only for Spaniards. Lockdown gave a good impetus into this direction. A lot of free time has appeared, and now I can share my skills not only live, but also online. Not only with the Spaniards at Kyshenko Gym, but around the world. Those who care – they can learn and practice with me online.

Kyshenko: I want to say to the young fighters, that they don’t need to feel sorry for themselves and pursue some kind of zeros in the record. First of all, you need to give out beautiful fights. If you consider yourself a good fighter, and you can show a good fight – do it. And think less about a beautiful record! Train and strive to perform vs the best fighters and in the best arenas!!