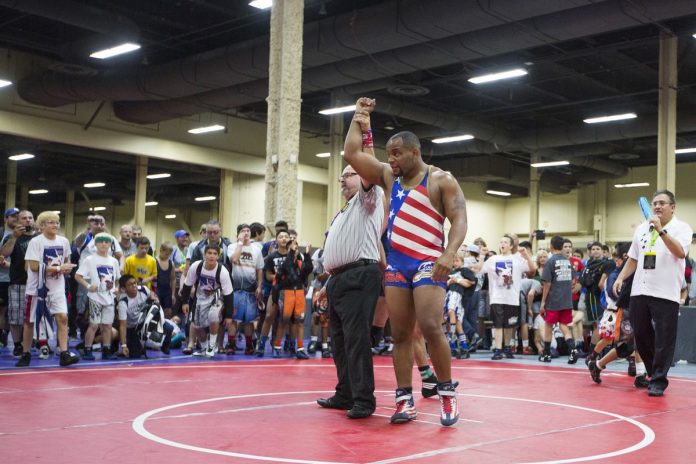 Daniel Cormier: ‘I’ve got to get back to wrestling’ for trilogy fight against Stipe Miocic

Long before he held titles in two different weight classes in the UFC, Cormier’s entire world revolved around the sport of wrestling. He earned All-American status while competing at Oklahoma State University before moving on to international competition where he represented the United States in two different Olympic cycles.

During those years, Cormier became friendly with another Oklahoma State alum — future Strikeforce champion Muhammed “King Mo” Lawal, who he actually defeated in the 2007 U.S. Open.

“He was bigger, stronger, and was just a lil better,” Lawal told MMA Fighting about that match. “I was one of the few guys that could push him. He ended up medaling that year.”

Cormier ended up moving on to the 2008 U.S. Olympic team in the 96-kg category while Lawal came up short with a loss in his final match, which ultimately sealed the deal for his transition into mixed martial arts. It was around that time that Lawal started calling on Cormier to follow him into fighting.

“King Mo started fighting right after he lost to Andy Hrovat,” Cormier said when speaking to fellow Olympian Kerry McCoy via USA Wrestling. “He went and he fought in Japan and made $50,000. I was like ‘what?’ and he went and bought a Cadillac and put like ostrich seats in it. King Mo’s ridiculous. Mo bought a Cadillac with ostrich-skin seats and they had King Mo crowns in the seats. Now $50 grand doesn’t get you that much but he must have spent all of it.

“It was amazing that he had made that much money and he kept calling me about fighting and saying this was something that I could do. I was like okay, I’ll give it a shot.”

Just over a year later, Cormier made his debut. He’s now widely considered as one of the greatest MMA fighters of all time but Cormier has never forgotten what got him into the sport in the first place.

With that said, Cormier is now starting to put together a training camp for what will be the final fight of his MMA career. At 41, Cormier plans to retire following a third bout with Stipe Miocic after the heavyweights split their first two meetings in 2018 and 2019.

Cormier already has a full team behind him at American Kickboxing Academy in San Jose but he’s planning on bringing in a slew of high-level wrestlers and coaches like McCoy to remind him where he came from before facing Miocic one last time.

“I’ve got to get back to wrestling,” Cormier said. “I’ve got to get back to guys like you Kerry, who are actually going to be able to tell me that ain’t enough. I have Bob [Cook] and my coaches do but I need to have that. Like Jamill [Kelly], when I was making 205 [pounds], Jamill would come and do the weight cuts with me. It wasn’t enough, he’d say that ain’t enough. Shawn Bunch does my weight cuts with me and if he thinks ‘DC, you gotta get back in there a little bit before we go home, you’ve got to do that.’

“But you’ve got to have those guys that knew you before all the fame, all the money and all the attention to really put you in your place. I think you know me in a way and I’m wrestling and I’m not doing enough, you’re going to tell me I’m not doing enough. I’m putting together a great camp for this last fight and I can’t wait to get ready.”

Time and time again, Cormier has made it clear that win, lose or draw, this will be his last fight but he’s obviously planning to retire as champion.

“I’m going to fight Stipe Miocic one last time and then I’m going to be done with this whole thing,” Cormier said. “I love this sport. I’m a competitive guy. Getting away from competition is going to be tough but I know that to win the heavyweight championship again is the right way to go out.

“Stipe and I have a fantastic trilogy. He’s a wrestler himself. Very respectful guy. Firefighter. Tough guy. But I need to be the champion as I’m done with this thing.”

The date and location for the fight have not been announced, although with Cormier beginning to put together his training camp, it would seem that will be determined rather soon.

Based on his comments, Cormier seemed to hint at a late summer showdown with Miocic, which means the trilogy would happen almost exactly one year after their last meeting.

“The fight is going to fall at a perfect time to where when I’m done, I can get right back to the kids at Gilroy High School and the wrestling team and starting to try to go and chase down that state championship,” Cormier said.

For now, Cormier will start training towards that ultimate goal as he prepares for one last fight before calling it a career.