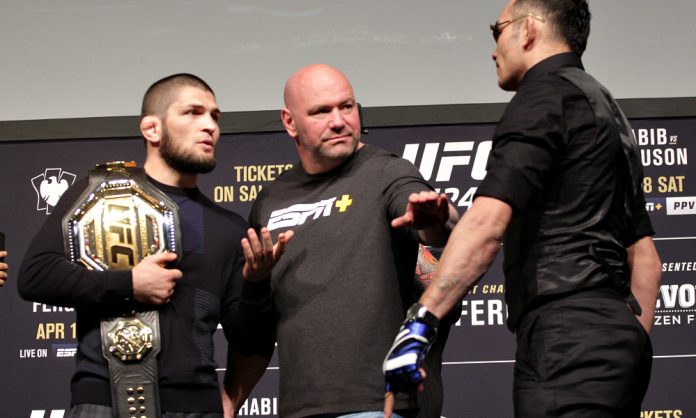 You know it’s a bad sign when UFC President Dana White refers to Khabib Nurmagomedov vs. Tony Ferguson as “the fight that got away.”

For those who hoped to see the the highly anticipated and frequently canceled fight rebooked this year, the UFC executive didn’t offer much encouragement during a Reddit Q&A on Wednesday afternoon.

Asked how confident he is in seeing the fight in 2020, White wrote, “Not very. I’m afraid what will happen if we try to make that fight happen again.”

Fans and MMA observers collectively groaned again earlier this month when the coronavirus pandemic led to the fifth cancelation of the matchup, the main event of UFC 249 on April 18. Nurmagomedov said he was marooned in his native Dagestan after being turned away in what he said the UFC told him was the event’s location in Abu Dhabi. Unable to leave his country, the UFC lightweight champ chose to observe stay-at-home guidelines issued to prevent the spread of the virus. Ferguson was rebooked against Justin Gaethje at UFC 249’s new location on tribal land in Lemoore, Calif., before political pressure led to the event’s postponement.

Now rescheduled for May 9 in Jacksonville, Fla., UFC 249 is set to host Ferguson vs. Gaethje in an interim lightweight title bout. Nurmagomedov, who’s currently observing the Ramadan holiday, expects to be back in action in August or September.

Nurmagomedov has welcomed the idea of meeting the winner of UFC 249’s main event, and White previously has said the winner will fight for the undisputed belt. But during today’s chat, White expressed more excitement at seeing a rematch between Nurmagomedov and Conor McGregor, who met at UFC 229 in the most lucrative pay-per-view in the promotion’s history. Nurmagomedov won by fourth-round submission and has repeatedly dismissed a rematch.

Asked for a fresh rematch, White pitched Nurmagomedov vs. McGregor 2.

“I would have to say Conor [vs.] Khabib,” he wrote. “Conor wants that rematch so bad and I would love to see it.”