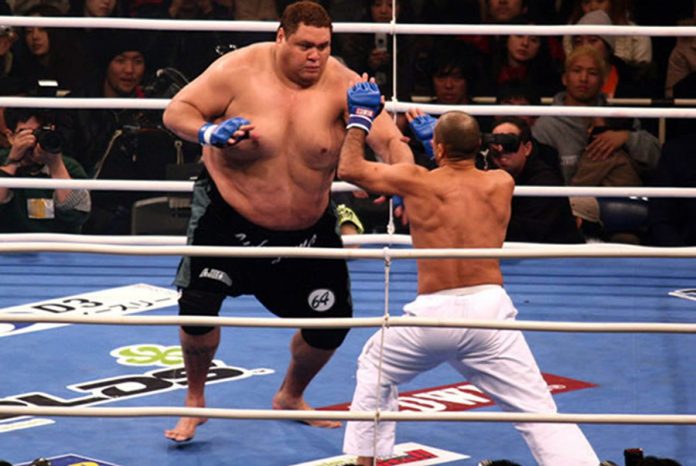 For the second year in a row Pride and K-1 joined forces for a huge card on December 31st. This time the action took place at the Osaka Dome with a capacity crowd packing the venue to see Royce Gracie submit Akebono.

The main event at K-1 2004 Dynamite! was an openweight clash of styles. Royce Gracie returned to competitive MMA action for the first time since his draw with Hidehiko Yoshida at Pride Shockwave 2003, exactly 12 months ago.

The Brazilian submission specialist was matched with a newcomer who brought a big reputation into his MMA debut. Akebono hails from Hawaii but made history by becoming the first non-Japanese-born wrestler ever to reach yokozuna, the highest rank in sumo.

The 43 year old has long since retired from sumo but made a comeback as a K-1 fighter. He was knocked out by Bob Sapp at Pride Shockwave 2003 and suffered four more defeats this year before switching styles to MMA.

The sumo star massively outweighed the Brazilian Gracie tipped the scales at a trim 86.6kgs while Akebono came into this fight at 205kgs.

Seconds into the fight Gracie found himself on his back with the Hawaiian giant on top of him. For most men this would have been the worst possibly scenario but the Brazilian was very much in his element.

Akebono could do nothing but lay on Gracie who was swiftly able to slide out from under him and get to his feet. The Brazilian threw a gentle leg kick and his giant opponent responded with a takedown.

With Gracie on his back the Hawaiian seemed content to simply lie on him. But he was clearly out of his element and the BJJ practitioner soon wrapped a right leg around his opponent’s left arm.

Anyone who has been following Gracie’s MMA career will know how dangerous he can be from these type of positions. Akebono soon found out the hard way as the Brazilian cranked on his arm.

Gracie had the rare omoplate submission locked in and Akebono had no option but to tap. The finish came at the 2:13 mark and sees the the three time UFC tournament winner improve his record to 13-1-2.

By contrast Akebono drops to 0-1 after losing on his debut. Coming off the back of a five fight losing streak in K-it is fair to say the transition from sumo to kickboxing and MMA has not been successful.