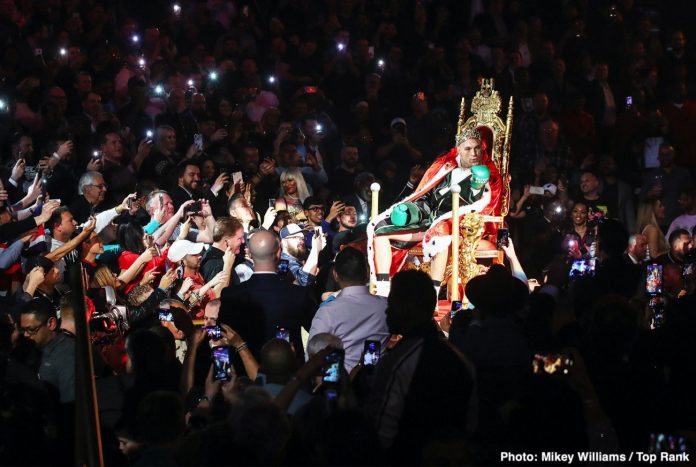 By Allan Fox: Johnathon Banks believes Deontay Wilder has more than enough time to improve his game before he faces Tyson Fury in a trilogy match later this year. Bank doesn’t think anything less of Wilder (42-1-1, 41 KOs) for having lost to Fury (30-0-1, 21 KOs) by a seventh-round knockout last February.

The trainer Banks still gives the 6’7″ Wilder plenty of credit for having held his WBC heavyweight title for five years from 2015 to 2020. He met up with a bigger fighter in 6’9″ Fury, who had the better boxing skills that enabled him to control the fight and eventually stop Wilder.

As of now, WBC champion Fury and Wilder are expected to fight in six months from now in October of this year. Provided the fight isn’t wiped out by the continuing global pandemic, those two will face each other in a trilogy match in October.

The Bully got bullied

“I know what he’s capable of, and I know what he can do,” said Banks to IFL TV when asked if he thought Fury was capable of performing the way he did against Wilder in their rematch. “He [Wilder] performed the way he always performs.

“He got in there looking for the one-punch knockout. That’s just what he does. The difference with this time was he [Wilder] couldn’t get those shots off, and he couldn’t get the range he wanted, and he was in there with a much bigger man.

“He came in, knocking guys out, but it was almost like the bully got bullied. I’m not saying he’s a bully. That’s the scenario of how the fight went. I still think Deontay is a good fighter. I don’t take away what he’s done up to this point because of that one fight,’ said Banks on Wilder.

Fury used his size and skills to walk Wilder down to beat batter him at will. Wilder tried hard to land his big right hand, but he couldn’t connect with it. Fury did an excellent job of dodging Wilder’s attempts at nailing him with his big right-hand equalizer.

Deontay Wilder has time to improve

“My opinion about him is the same before this fight and after this fight,” said Banks on his view of Wilder not having changed after his loss. “I think he has plenty of time to get in the gym and work on whatever he feels he needs to work on.

“I just hope for his sake that he and the people that he surrounds himself with, his team, I know coach Jay and Mark Breland, have nothing but love for this guy.

“With that being said, I hope they talk openly to him to let him know that ‘we got a few things we need to work on before we do anything else.’ I don’t feel Deontay Wilder is finished. I don’t feel it’s over for him,” said Banks.

There’s a lot of time for Wilder and his team to isolate and fix the mistakes that he made against Fury in their second fight. It’s obvious what Wilder did wrong. If his training team can’t figure out he did wrong by the time the trilogy match rolls around in October; then Wilder needs to dump them. They’ve done very little to improve his flaws over the last 12 years.

Wilder can’t afford to have trainers that aren’t able to see obvious mistakes in his game that need fixing. The errors that Wilder made are things that even a mediocre trainer will be able to repair. Whether Wilder’s current training team is good enough for him to improve is unknown.

What we don’t know is if Fury is going to be able to keep this up for long. He’s already talking about wanting to retire in three more fights.

“I was sparring Tyson years ago, and Emanuel Steward told me ‘he’s definitely going to be heavyweight champion if he keeps going,’” said Banks. “One of the hardest things to mess within the sport of boxing is a big man that can box. He said, ‘That’s why Bowe gave people problems.’

“Bowe just didn’t have a lot of heart, and that’s why he didn’t fight Lennox. Throughout history, when you had a big man that could not only box but could also fight, he’s always been one of the hardest guys to deal with. If you look at Lennox, Emanuel taught him how to box.

“Lennox already knew how to fight. Lennox was able to go on a long journey with his career because Emanuel Steward taught him how to box. Every once in awhile, he would sit down to fight, and then he went right back to boxing. He couldn’t fight Holyfield because he couldn’t out-fight Holyfield,” said Banks about Lewis. “Holyfield’s arms were too short.

“He was just too good in those small moments. So he had to outbox Holyfield. So that was one of the things Emanuel Steward was able to do to turn him into the undisputed champion was to teach him how to box. A lot of these guys take criticism as someone is against them.

Emanuel Steward saw enough of Fury in the short time that he worked with him to make a prediction on his future success.

Evander Holyfield, 58, beaten in round one...

Jake Paul RETIRES from boxing with a...