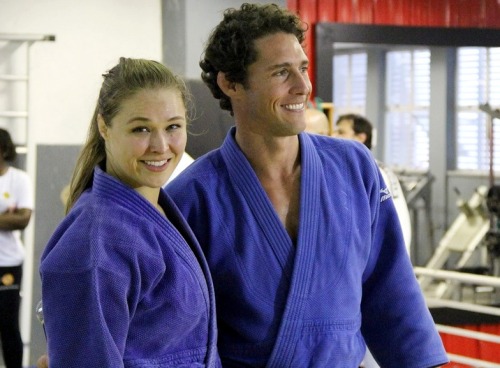 Flavio Canto has represented Brazil as a Judo Olympic Athlete and is also a Brazilian Jiu-Jitsu black belt alongside that. His career started way back in 1995 with a bronze medal at the Pan American Games in the -78kg category but after moving up to the -81kg category, he started to see more success as the years went on. Canto won silver at the next Pan American Games in 1999 before finally claiming the Gold medal in 2003. After his best performance yet, he then went on to win the bronze medal at the 2004 Olympic Games in Athens and since his retirement, he works as a TV presenter for Brazilian networks TVGlobo and SportTV.

As one of the most, if not the most, recognizable Judoka in Brazil, Flavio Canto must have been asked time and time again to show his signature submission, The Canto Choke. It’s normally unusual for Judoka to be known for their ground game, as the vast majority specialize in earning victories from the standing phase, like the now-legendary Teddy Riner. But Canto is no normal Judoka, there are stories abound of him apparently besting a number of very high level BJJ athletes on the ground in training and his BJJ black belt lends some credence to the rumors.

Canto took the unusual approach to Judo of including plenty of BJJ into his training regimen to help improve his grappling on the ground. This is something that many BJJ athletes already do the other way round, training in Judo in order to help their standing grappling for BJJ.