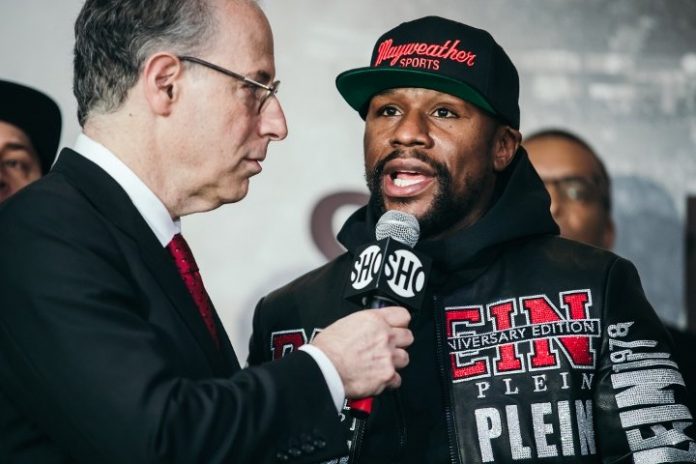 Floyd Mayweather: I Want The World To Stick Together And Keep Believing

Floyd Mayweather Jr. has decided to break his silence.

The former pound-for-pound king and five-division world champion has been forced to contend with more grief than most these days, even amidst the ongoing coronavirus disease (COVID-19) pandemic which has wreaked havoc around the world. The first wave of global shutdowns came just as Mayweather was dealt with the crushing news of the passing of two key people in his life—Josie Harris and Roger Mayweather, whose deaths came just seven days apart.

News of Harris—with whom Mayweather has three children—having been found dead in her car on March 10 at the age of 40 came as the all-time great boxer was conducting a tour overseas which he cut short to return home. One week later came the devastating blow of his uncle Roger having passed away just one month shy of his 59th birthday, after years of battling health issues.

All of this came about while people’s lives were forced to change in an instant as mass gatherings and businesses around the world were forced to shut down in compliance with CDC (Center for Disease Control) regulations. Cognizant of the suffering of others, Mayweather made a point to gather his thoughts for the world to hear.

“What I want to talk about is really about… I haven’t had a chance to come out and just really talk to the world, talk to the people,” Mayweather said in a touching video through his social media platform. “I’ve been dealing with a lot. Dealing with the loss of the mother of my children. She was my significant other. She was a great woman, a great person. Dealing with [the passing of a great trainer, a great uncle, a great father figure, Roger Mayweather.

“I’ve been dealing with a lot and haven’t really had a chance to speak, to talk to the world. I’m affected by this. It hurts to see what the world is going through. But I want us to stick together and keep believing. No one is perfect. I’m not perfect and I strive to be a perfectionist every day. But no one is perfect. I make mistakes all the time. The only thing I can try to do is help this world become a better place.”

Mayweather retired from the ring for good in 2017, exiting the sport with a perfect record of 50-0 (27KOs) along with having claimed four Fighter of the Year honors and most recently having been recognized as the Fighter of the Decade from 2010-2019. His events have generated more revenue than any other boxer in history. The former five-division champ has headlined the sport’s three highest grossing Pay-Per-View events ever and continues to serve as a driving force through his Mayweather Promotions company.

For his love of money (a ring moniker he long ago adopted in ditching his previous ‘Pretty Boy’ branding), often lost in the conversation is the countless ways in which he gives back to the community. Mayweather formed the Floyd Mayweather Jr. Foundation in 2009, whose organizational mission is “dedicated to empowering and promoting the social development and advancement of adults and adolescents. The foundation is singularly focused on community health and wellness, economic growth and development, and impactful youth education.”

The renowned superstar undoubtedly loves to flaunt his wealth, but also spends much of his time alongside his business team coming up with ways to do everything better. Having taken the necessary time to digest the heartbreak within his own personal life, the larger-than-life figure is now prepared to rededicate his life to carrying out that mission.

“With everything going on, I’mma continue to do my part,” Mayweather vows. “I don’t have to show the world what I’m doing. I can do something behind closed doors. It’s not about money. The money I will be giving up will be to feed the people and help the people who don’t have a lot because of this situation, I will continue to give back. I will never talk about it.

“As long as God knows that I’m doing a good deed, that’s what’s important to me. To everyone in the world, from Floyd Mayweather and The Money Team we love you all. We will always be there for everyone in (the United States) as well as the world.”