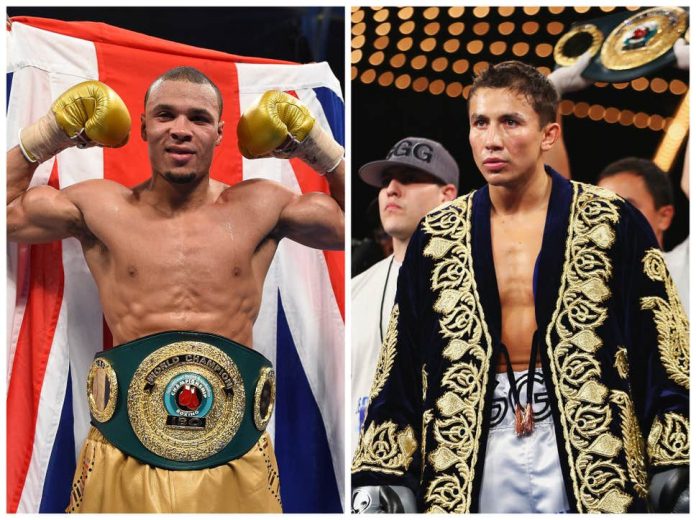 Chris Eubank Jr. wants to fight for Gennady Golovkin’s middleweight titles: ‘You’re No 1 on my list’

Chris Eubank Jr. has warned Gennady Golovkin, the two time world middleweight champion and one of the pound-for-pound best boxers in the world, that he is the “number one name” on his hit list of desired opponents.

Korobov injured his shoulder after throwing a punch seconds into round two and was unable to continue, with Eubank Jr. declared the winner by a technical knockout in Brooklyn, New York.

Eubank Jr. is back campaigning at middleweight after outpointing domestic rival James DeGale to win the vacant IBO super-middleweight title in February 2019. And the 30-year-old hopes to fight Golovkin next, after missing out on a chance to challenge for the Kazakh’s world middleweight championship in 2016.

Golovkin instead decided to fight Kell Brook, whom he stopped in brutal fashion in the fifth round to retain his WBC, IBF, and IBO middleweight titles.

“He is the No 1 name on my list right now,” Eubank Jr told Sky Sports.

“We were supposed to fight and it has always irked me that the fight was stolen from me and given to Kell Brook at the last minute.

“In the back of my mind it has always been there. I’ve always wanted to fight him.”

Golovkin appears destined to fight Canelo next in a mouth-watering trilogy bout, having drawn with the Mexican pound-for-pound king in September 2017 and then lost a controversial decision in a September 2018 rematch.

Since then, the 38-year-old has stopped the little-known Canadian Steve Rolls and secured an underwhelming decision win over Sergiy Derevyanchenko, to pick up the IBF and IBO middleweight titles left vacant by Canelo.

And it is these titles that Eubank Jr. has his eyes on, having conceded that a fight with Canelo is unlikely for the time being.

“People put [Golovkin’s] name so high,” Eubank Jr. added. “But I know I can beat him. I know that I have the tools and the style to take this guy out.

“My speed, my tenacity? I don’t think he would be able to deal with it.

“This is the main fight.

“Canelo? Everybody would love to fight him but he’s not going anywhere. He will be in the game a lot longer. Golovkin will have a couple more big fights then bow out.

“I’ve been trying to get this fight for years. This is the fight that I want.”

Eubank Jr. has lost two fights in his professional career. The first to the still undefeated Billy Joe Saunders in November 2014 for the European, British, and Commonwealth middleweight titles. The second a wide points decision to George Groves in the World Boxing Super Series super-middleweight semi-final, which resulted in Prince Naseem Hamed memorably imploring him to retire from the sport.