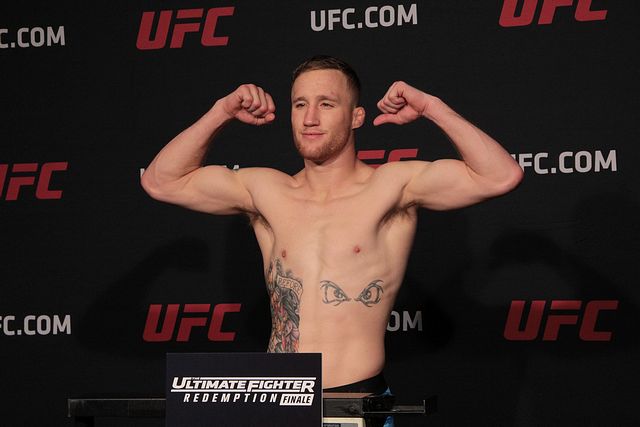 Prior to UFC 249, Justin Gaethje was not an advocate for accepting short-notice fights.

However, his philosophy changed when given an opportunity to win a UFC belt, and now, “The Highlight” will square off against Tony Ferguson for the interim lightweight crown on May 9 in Jacksonville, Florida.

“I have conversations with my athletes and I follow their purpose. I’m the co-pilot, they’re the driver,” Gaethje’s coach, Trevor Wittman, told ESPN. “His goal was never to take a short-notice fight. But he’s purposeful, and he wanted a world title, he’s been training for a world title, and that’s his purpose now.

Gaethje originally agreed to face Ferguson on April 18 when reigning 155-pound king Khabib Nurmagomedov was stranded in Russia due to travel restrictions imposed to combat the coronavirus pandemic. That version of UFC 249 was postponed when Disney and ESPN executives requested that Dana White not go through with his plan of holding the event on tribal land in California. The new date gives Gaethje more time to prepare, but not much more.

While Wittman initially was against taking the bout, one phone call with his fighter seemed to change everything.

“He told me, ‘Man I’m in shape, I’ve been sparring. I’ve been in the gym. With this going on right now, I want to fight. It’s who I am.’ When you have opportunities present [themselves] that are in line with what you’re doing, you can’t pass up opportunities like that,” Wittman recalled.

“I had his back first, and I wanted to make sure that he’s sticking to his guns. Because the last thing you want to do is say, ‘I should’ve did this.’ If we’re going into it, we’re going into it full bore. We’re not gonna make no excuses.”

Now, Wittman is looking forward to the challenge of trying to end Ferguson’s 12-fight winning streak.

“You can tell when Justin wants something and when he’s determined. It’s a great fight. I love Tony, I respect Tony — he’s a great fighter. And we want to face the best.”