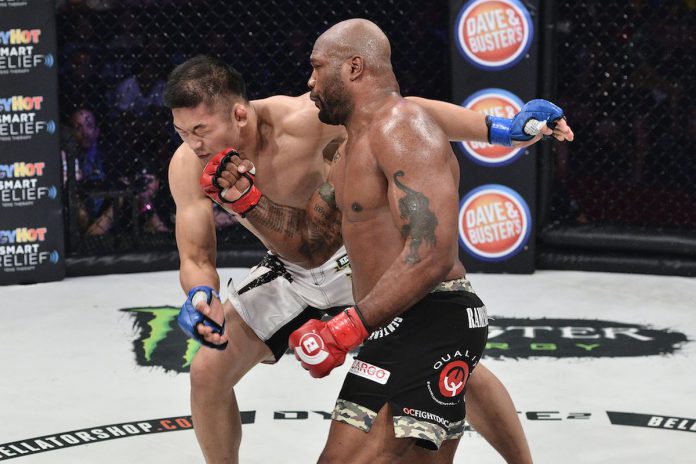 Bellator’s Scott Coker has never been a guy to put himself front and center like certain other fight promoters out there, so it’s unsurprising that we haven’t heard too much from him over the past few weeks as everyone gauges the effects and fallout from the current Coronavirus pandemic. But with the news that Bellator has landed a deal to broadcast classic fights on CBS and will return with new events in June, Coker has come out to give us various updates on the promotion’s plans.

As usual, Coker played things close to the chest. The former Strikeforce head is the king of saying ‘maybe’ to nearly every question he gets, and that’s what his answer was when asked if we’d see Quinton “Rampage” Jackson back in the Bellator cage. The last time Jackson fought for them, he showed up for his heavyweight fight against Fedor Emelianenko in Japan pressed right up against the 265 pound weight limit. After several hard combos from Emelianenko in the first, “Rampage” dropped to the canvas and tapping in a Sapp-esque acquiescence to his opponent.

“Rampage, he did the best he could,” Coker told MMA Junkie diplomatically. “He got hit and I think he just felt the power and he said ‘There’s going to be another day for me and it’s not going to be tonight.’ Fedor is who he is. Even though Fedor is in the fourth quarter of his career and it’s the two-minute warning, the guy is still dangerous. Any day that he punches you it’s lights out.”

“I think he’s got to figure out what weight class he wants to fight at, and that’s really what it comes down to,” Coker continued. “I know we fulfilled our obligation with him and we’re still talking to his manager. We have a good relationship with him and Tiki (Ghosn), and it’s just going to be like, does he really want to do this? Does he really want to go out there and throw down? Because there’s some times in a fighters career where it’s like, that’s it. They’ve done everything they can in the sport.”

Jackson’s performance with Bellator over the past four years has gotten worse and worse as he went from 224 pounds in his first heavyweight fight to 253 for his loss against Chael Sonnen. 265 pound “Rampage” was like a fat shadow of the 205 pound monster that used to show up in PRIDE and UFC.

“Listen, if Rampage retired today, the man is a legend,” Coker concluded. “He’s already done it all. He doesn’t have anything to prove to anybody, including myself. I think that’s something we’ll have a conversation with him. But Tiki is saying he wants to go back down to 205. If he’s really serious about taking another stab at it. We’ll definitely have that conversation.”

Jackson will be pushing 42 years old by the time Bellator starts running events, and is known to have thyroid issues that mess with his ability to train and regulate his weight. That’s a lot to overcome even when there aren’t young healthy guys looking to make a name off kicking your ass, which Bellator is full of. We certainly don’t want to see Jackson step back into the cage without a lot of big changes, but what a story it would be if he did indeed get ‘really serious’ again and pulled a final win off.